In the City of Lights, a ray of hope for the ultra-poor

A recent global meeting in Paris acted as the first occasion for sharing the first tranche of substantive results from 10 pilot programs implemented across 8 countries around the world based on BRAC’s flagship program for reaching the ultra poor – Challenging the Frontiers of Poverty Reduction: Targeting the Ultra Poor, otherwise shortened to CFPR:TUP. 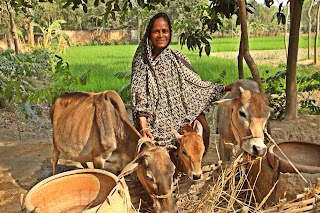 A recent global meeting in Paris acted as the first occasion for sharing the first tranche of substantive results from 10 pilot programs implemented across 8 countries around the world based on BRAC’s flagship program for reaching the ultra poor – Challenging the Frontiers of Poverty Reduction: Targeting the Ultra Poor, otherwise shortened to CFPR:TUP.

Some of us were lucky to be part of a meeting recently at BRAC Centre in Mohakhali where Dr Syed Hashemi, founder-director of the BRAC Development Institute at BRAC University, briefed us on proceedings from the meeting. Convened by CGAP, the Ford Foundation, BRAC USA and the BRAC Development Institute, this was the fourth global learning event of the CGAP-Ford Foundation Graduation Program, named after the graduation model that is at the heart of the CFPR:TUP program, whereby the ultra-poor – those at the very bottom of the economic ladder who often fall through government social safety nets and are missed by mainstream poverty reduction programs like microfinance – receive help in the form of direct asset transfers, skills-based training, and consumption support to “graduate” out of extreme poverty in a time-bound fashion. The aim is to put them in a position at the end of the program, whereby they can avail mainstream programs such as microcredit, if they choose to do so.

CGAP and the Ford Foundation chose to throw their weight behind the model in 2006, following the results from BRAC’s own first pilot that was implemented in 2002. Till today, it remains the most intensively studied of all the graduation programs implemented around the world, with three rounds of surveys carried out so far on the same group of participants since 2002. They show:

The Paris conference served to share results from 6 of the 10 pilots based on the BRAC model that have been completed so far. Four of the pilots – in Ethiopia, Peru, Yemen and Ghana – are still running. Academics and practitioners closely following the program’s progress are looking forward to 2014 very eagerly, when the full results from 7 of the pilots will be known, alongside longer term results from completed sites to see if the results sustain themselves. Some of the pilots have important questions regarding cost and scaling up built into their structure. For example, the Ghana pilot is focused on answering how much “bang for one’s buck” (in the words of Dean Karlan of Yale University, one of the researchers who presented the findings) is gotten through asset transfers.

The 6 completed pilots include three in India, and one each in Haiti, Pakistan and Honduras. The centre-piece of the two-day meeting that took place in Paris was the presentation of the research on the impact of the graduation pilots on the lives of the extreme-poor. Over 90 practitioners, donors, researchers and policymakers witnessed some of the leading development economists in the world, such as Esther Duflo and Dean Karlan, present the findings. The results from 5 randomized control trials – all the rage in development economics today – conducted on programs in Bangladesh, India, Pakistan and Honduras, indicated that the model achieved positive results with “consistency” across all sites. As was relayed to us by Dr Hashemi, 4 out of the 5 RCTs results showed increased food security, increased as well as more diverse incomes, and increased assets. Esther Duflo, who has championed the use of RCTs alongside others such as Abhijeet Banerjee, remarked: “These are very, very good results..I don’t think you could have ever expected anything better.”

Some of the pilots sought to measure “intangibles” such as happiness using either qualitative or quantitative methods, and they too returned largely positive results, something touched upon by Dean Karlan in a touching blog post on the CGAP website.

All in all, the impression one gets is that the meeting set the stage for further exploration of the scalability of such ultra-poor programs, as well as assistance in building other programs aimed at eradicating extreme poverty such as government safety nets, livelihood programs, and microfinance, and how they can all be sequenced in a way that benefits those who need our help the most.

Very interesting. How can we get access to the results presented for each pilot? Richard
meyer.19@osu.edu