Bangladesh is home to nearly 800 rivers. In Mongla, a region off the southern coast, water stretches out in every direction, but there is not a drop to drink. Communities there have taken to harvesting from the sky: through storing rainwater.

Lokkhi Mondol is surrounded by water. The sun glitters across the river on the right and ponds are filled with shrimp on her left. But Lokkhi cannot drink from any of it. Her community is part of the 2.5 million people in Bangladesh who are struggling from a lack of drinkable water because of climate change. Lokkhi Mondol travelling on the Pashur River to fetch water from a pond. It is a 45-minute boat ride. Photo: Bayezid Islam Polin © BRAC 2021.

There is no drinkable water left in Mongla.

Residents have two options: they can pay for water – which can cost up to BDT 10 a litre, depending on who is selling and how high the demand is; or they can collect water from the handful of ponds left with low amounts of saline – but that water requires decontamination, either by boiling or using aqua tablets (which costs money).

Salinity in the water has always been high in coastal Bangladesh due to its proximity to the sea. In the past four decades though, salinity increased by approximately 26% in the country, even spreading into non-coastal areas.

80% of Bangladesh’s commercial shrimp cultivation happens in the southern coast.

This is killing off fish and plants, hitting the coastal districts of Khulna, Bagerhat and Satkhira particularly hard. Communities there rely primarily on farming and agriculture and are seeing their income and food sources dwindle. Pure drinking water is unavailable, and securing it is costly. Consuming salinated water causes health complications, such as urinary tract infections, diarrhoea, hypertension and strokes.

Families in Bagerhat’s Mongla (often the women and girls) spend up to three hours on the Pashur river travelling to fetch freshwater from faraway sources. Amina, who lives near Mongla town, on her way to collect water from the municipality’s water distribution corner. Photo: Bayezid Islam Polin © BRAC 2021.

The shortage of drinking water in Mongla is felt particularly during the dry seasons. For seven months of the year, there is no freshwater due to lack of rainfall, and concentration of salt peaks as ponds and rivers dry up.

Lokkhi runs her household with earnings from her husband’s shop, which brings in approximately BDT 8,500 (USD 81-116) each month – a monthly income similar to others in her area. “Nearly half of the money goes into buying water during the dry seasons, when the ponds dry up”, says Lokkhi. Add to this her rent, groceries and other costs – and her household just teeters on the edge of poverty.

Families who earn much less than Lokkhi cannot afford to pay for water, and resort to drinking salinated water from the ponds. Aquatabs and boiling are common methods to purify water, but both can be expensive for families who are living in poverty.

The roads along Mongla were once lined with coconut trees. Areca nuts and paddy grew in abundance there even a decade ago. Today, communities rely on food imports from across the country. Saltwater reduces the arability of land, so farming takes a hit, creating a double threat: livelihood options are limited, so people have less money in their pockets, and imported food is costly – leading to low levels of nutrition overall. The rise of shrimp farms in coastal regions is another reason for higher salinity in the water and land. This rise has been fueled, in part, by salinity – since many agricultural options are not viable, people opt for aquaculture, particularly shrimp and crab farming as they thrive best in saltwater. These farms require a lot of sea water to be brought in, which affects all land nearby, fueling the challenge of food production further.

Kitchen gardens – an easy source of nutrition for families living in rural areas – are difficult to sustain in Mongla, because plants don’t grow into maturity as salt reaches growing roots.

“Diseases follow us like shadows. Do you know how many of us have high blood pressure? I can’t think of a time when my daughters were young, that either one didn’t have diarrhoea”, Lokkhi says. Research backs her claims. Several studies link high sodium consumption with hypertension, diarrhoea, kidney diseases, strokes and seizures, particularly during pregnancies.

Livelihood options are limited, so people have less money in their pockets, and imported food is costly – leading to low levels of nutrition overall

Monsoon brings some respite. Rainfall means families can drink the rainwater that collects at the surface of ponds. Water levels also rise, which means less salinity overall in the ponds. There has also long been a tradition in these communities of using large earthenware pots – named motka – to harvest rainwater and save for the drier months. Earthenware pot to collect run-off rainwater (left); a plastic bowl being used as one pot is damaged (right). Photo: Collected

The problem with the pots is that they are prone to breaking and catching mould, contaminating the stored water. They also hold up to 16 litres of water, depending on the size, which is not nearly enough to sustain the families through most parts of the dry seasons.

By building on the existing practices of and working with the communities in Mongla, a rainwater harvesting system has been developed by BRAC’s climate change programme to help families in low-income households tackle the water crisis. The system includes a concrete base, a polyplastic tank with a filter installed, and pipe fittings that are attached to the tank’s roof. It can store up to 2,000 litres of rainwater – enough to last a majority of the dry seasons – for critical safe water needs. The tanks collect run-off rainwater from rooftops through a pipe and come with a washable polypropylene food-grade bag attached to its opening, which acts as a filtration system that helps to keep rust, dirt and debris from the roof out of the stored water, and prevents bacteria infestation throughout long periods of storage. Installation of the tanks costs BDT 30,000 (USD 350) and each tank lasts up to 20 years. The households also receive training to maintain the tanks.

Shahenur Begum has installed a rainwater harvesting system in her home with BRAC’s support, and is able to skip travelling daily to collect drinking water. She saves three hours of her day, which she spends with her son Siyam. “I am relieved that I no longer have to travel to collect water. It’s a big weight off my chest. My son is only eight months old – if no one is around to watch him, then I would have had to get on a boat with him when fetching water”, says Shahenur. 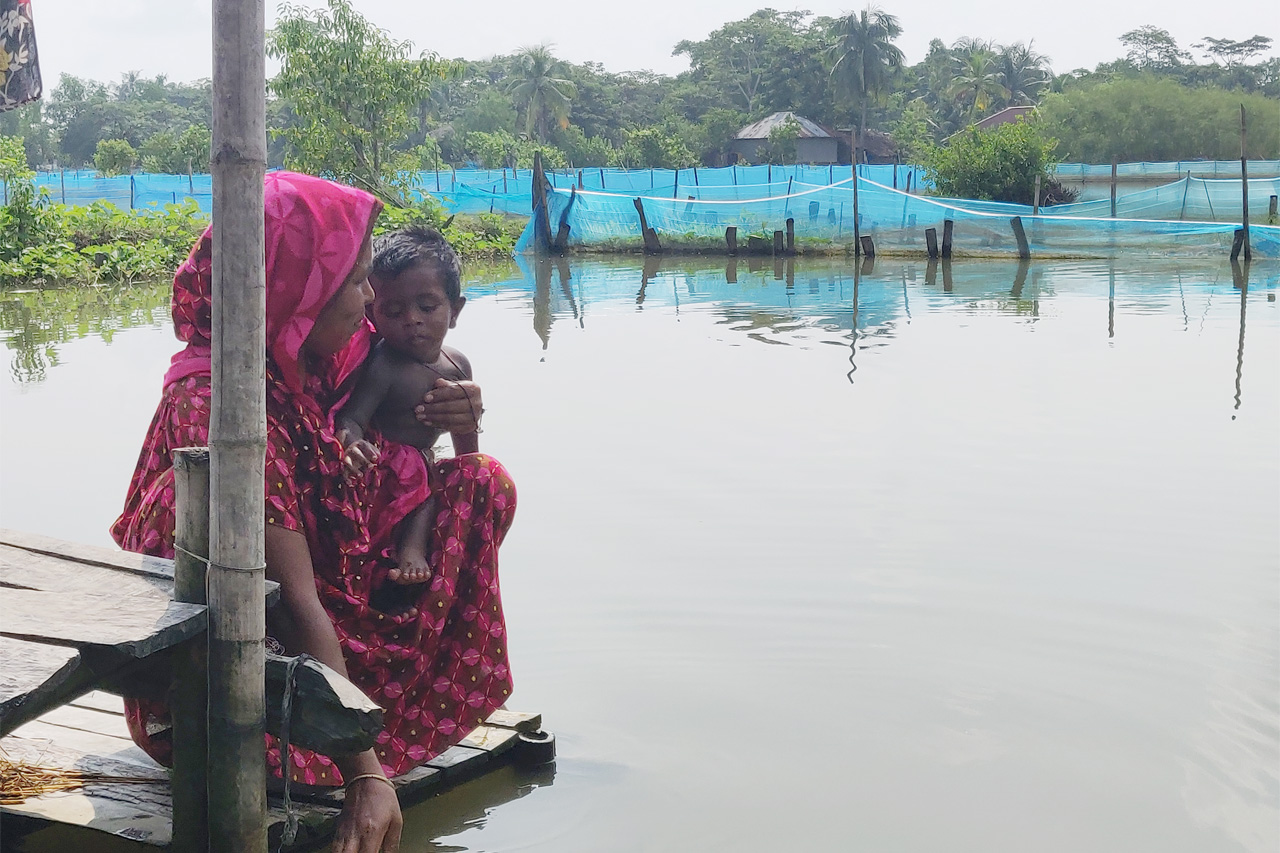 Siyam is getting help from his aunt to clean his hands using the pond’s water. Photo: Raidah Morshed © BRAC 2021.

Salinity’s impact on agriculture, income and health has exacerbated poverty in what is already a climatically vulnerable region in Bangladesh. Coastal areas are particularly at risk to the impacts of rising sea levels, and thousands of people from these regions are forced to migrate to towns nearby every year. However, not everyone can afford to move.

While Mongla town has often been touted as an adaptation success story, residents who cannot afford to migrate from the rural parts of the region continue to live with uncertainty of river erosion and an unending battle with water scarcity.

Luba Khalili is the Lead Content Strategist at BRAC Communications.