They say this place was haunted.

The local who guarded the property at night was terrified at the idea of opening a school here.

“A school in a lonely place like this?” he muttered, “Just wait and see.”

Three years have passed by since. The ghosts have fled the scene, and the nights are no longer lonely but full of life.

This year, a group of 74 young girls and boys preparing for their Junior School Certificate examinations made it their new haunt. Supervising them 24/7 was a dedicated team of teachers and staff, who the Headmaster, Abdul Malek, calls “fighters”.

This ghostbusting team of “fighters” and students made a special kind of school.

Life in the wetlands depends entirely on the waters, and this year’s torrential rains flooded the whole area before crops could be harvested, drowning a year’s worth of income for farmers. The few people who have not left the area yet are just waiting for the water to leave – there is nothing else that they can do. Harvesting happens just once a year.

More children drop out of school in the wetland regions than anywhere else in the country. On average, less than 1% finish high school.

The weather becomes more unpredictable each year, schools are frequently inundated, and many are shut down. The roads to and back from school are often submerged and broken beyond repair. How do we ensure that children can access education?

We operate a number of initiatives in the wetland regions, from boat schools, to tiny, very remote schools, to floating school buses. For the past three years, we have also been running night schools.

With water higher than usual this year, the journey to and from school was especially long. In the lead-up to exams, every hour counted.

Alor Dishari Middle School took on a new, unusual initiative to support the candidates before their exams – they began a school that ran all day and night, so children did not have to travel anywhere. The boats that would normally pick up and drop off the children still went to and from, but they were not carrying children. They picked up meals from the children’s houses and dropped them off at the school.

One of the boatmen was a young man named Mohammad Ainul. He used to be a farmer, but lost his harvest in the flash floods. He used his savings to build his boat, in which he transports students to and from the school in.

“The students are wonderful!” he says, “they always have stories to tell, and the joy on their faces and in their laughter brings me happiness every day. I was missing them in the lead-up to their exams. I was just carrying their dinners!”

Learning took place all day, and then, after a short break for dinner, continued in the evening. Tables and chairs were moved aside, sleeping materials were laid out and everyone went to bed. Girls and boys stayed in separate classrooms, and the teachers slept in their fixed quarters nearby. Our education programme is the largest secular private education system in the world. No matter how big we scale up to however, we will always be implementing small projects like this.

We ran this night school for three months, and every single one of the students in Alor Dishari Middle School attended their national board examinations this year.

Unique challenges demand unique solutions, like a night school on a small island in a vast inland sea. No child should miss their exams, no matter where they live.

Sarah-Jane Saltmarsh is the head of content, and Zaian F Chowdhury is a senior writer at BRAC Communications. 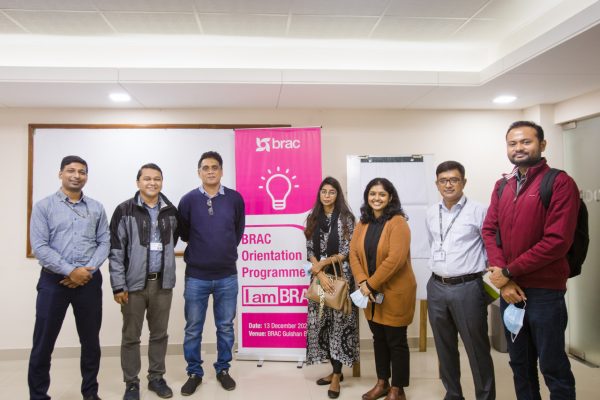 Online onboarding: Welcoming the next generation of changemakers