Utilizing a grassroots approach to development is something that BRAC does incredibly well. Given the breadth of BRAC’s reach, undertaking grassroots best practices has proven to be a cost effective way of spreading the messages BRAC desires to send its constituents worldwide. During our field trip to Rangpur, Bangladesh we were able to witness an excellent example of grassroots engagement: Popular Theater. 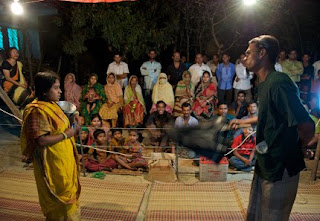 Very inspiring! Here is a similar situation in Guatemala through an organization called ArtCorps.
http://vimeo.com/17991923