Many can attest to its necessity, few can argue against its importance. From health and nutrition to agriculture and energy, one doesn’t have to look far to see the critical role water plays in our lives. 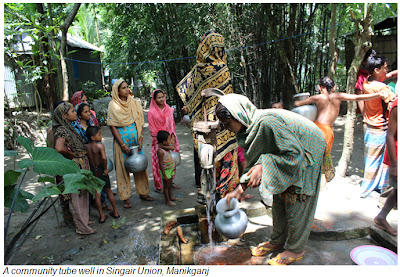 Many can attest to its necessity, few can argue against its importance. From health and nutrition to agriculture and energy, one doesn’t have to look far to see the critical role water plays in our lives.

But what happens when this crucial necessity threatens our very livelihood?

This conundrum was the focus of a recent dissemination seminar hosted by BRAC titled “Rethinking the Arsenic Crisis: Strategies Towards Ensuring an Arsenic-free Bangladesh.” The seminar, hosted by BRAC on Thursday, March 29th, highlighted findings from a field study I conducted which was centered on understanding the villagers’ perspectives on the arsenic crisis. The seminar also featured a panel consisting of UNICEF Water and Sanitation Specialist Peter Ravenscroft,  WaterAid Country Representative Khairul Islam, as well as leaders from a cross-section of institutions ranging from the Ministry of Health, Bangladesh Attorney General’s Office, Dhaka Water Supply and Sewage Authority (WASA), and the US Embassy.

What brings such a diverse cadre of people together?

In a word, arsenic.

Unsafe levels of arsenic have been found in over 1.4 million tube wells across Bangladesh, a phenomenon the World Health Organization (WHO) calls “the largest mass poisoning of a population in human history.” Arsenic is a colorless, odorless, naturally-occurring metal that is poisonous if consumed over long periods of time. Long-term exposure results in Arsenicosis, an incurable cancer-causing disease with a high latency period (it takes 5-20 years after initial exposure to show the first signs of skin lesions on the hands and feet, and patients eventually suffer from various forms of internal cancers).

Over the past nine months, I have visited 26 villages across five arsenic-affected districts ranging from Meherpur, a border district in Western Bangladesh, to Chandpur, a heavily-affected area in Southwest Bangladesh. Across the country, the BRAC Water, Sanitation and Hygiene (WASH) field staff and a team of research assistants worked hand in hand in order to understand what villagers think of the crisis, how they are coping with the lack of arsenic-free water, and where they see a way forward. 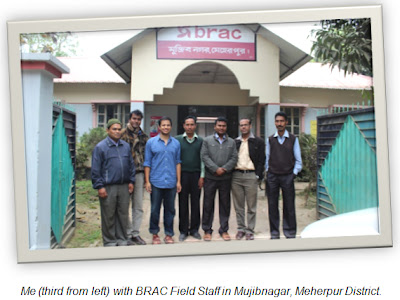 Collectively, we surveyed 1,239 households and hosted over 50 focus group discussions and in-depth interviews for a better understanding of the villagers’ attitudes pertaining to water and the impact arsenic has had on their lives.

What did we find?

For starters, the fact that arsenic was colorless was news to 33% of the households (20% believed it was red, 11% yellow).

As a response to the crisis, safe tube wells were painted green (safe in Bangladesh means less than 50 ppb of arsenic, the WHO standard is 10 ppb) while the unsafe ones were painted red. In some villages, some people have been undoing this intervention and repainted their red tube wells green. Why would they do such a thing?

This was a stark contrast from the realities in Golaidanga village in Manikganj, an area where there were no Arsenicosis patients, and people voluntarily desired to have red coloring on their tube wells. During my stay in Golaidanga, I noticed how all newly-installed private tube wells featured bright red piping. When asking the drillers why the tube wells were being installed with red pipes, they all stated how red was now popular amongst tube well manufacturers. This was emblematic of the disconnection that lays within the water ‘ecosystem’ of the awareness campaign planners, communicators, and the private tube well installation companies. 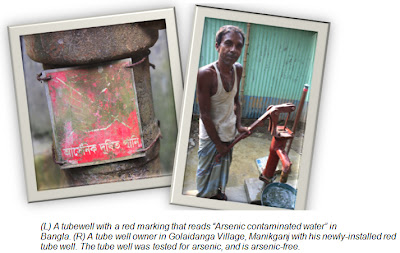 Many people knowingly drank from arsenic-contaminated tube wells because they hadn’t suffered from Arsenicosis, and hadn’t met anyone that did.

You can’t see it, can’t smell it, and neither you nor anyone you know has gotten sick from it. So what’s the harm in drinking it?

This was the type of thinking we found in arsenic-affected areas that had relatively low numbers of Arsenicosis patients. At the seminar, Peter Ravenscroft of UNICEF emphasised the need to motivate villagers who live in areas such as Golaidanga. The low risk perception such people attribute to arsenic is one of the most challenging aspects of confronting this crisis. Arsenicosis does not catch on immediately; it is a stealthy, slow poison that gradually builds up to skin lesions and various internal cancers. By the time the skin lesions appear, it is usually too late. Vitamin supplements and certain medications may be able to slow the health effects, but the most effective treatment is ensuring the consumption of arsenic-free water.

Khairul Islam of WaterAid discussed the sobering reality the arsenic dilemma has brought onto the larger water and sanitation sector in Bangladesh. In 1997, 97% of the rural population had access to safe drinking water. According to Mr. Islam, this number was brought down to 81% upon the discovery of arsenic in groundwater. He cited the 60% increase within the first year of the current administration’s water and sanitation budget (from 800 crores to 1400 crores) as a promising sign for progress, but noted how despite the increase, there have been no newly-funded projects related to arsenic mitigation.

The Additional Attorney General reminded us of how the United Nations recently declared access to basic water and sanitation services as a human right. He called on all actors to re-focus their attention on devising feasible solutions by putting the people first, and  switching the focus on understanding the villagers, as well as inclining towards delving into the lab and designing technologies that have faster flow rates or a higher capacity.

Dhaka WASA Managing Director Taqsem Khan stressed how fortunate he felt in the fact that arsenic had not been found in Dhaka. News to the contrary would be an unsettling scenario considering how reliant the city dwellers are on groundwater (even the best surface water filtration technologies seem to meet their match when used against the heavily polluted surface waters of Dhaka). 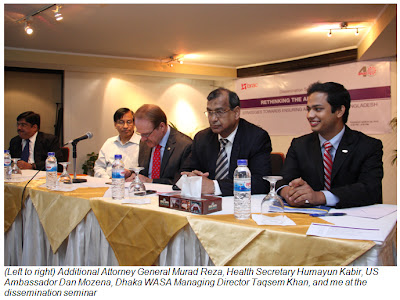 The keynote was delivered by US Ambassador Dan Mozena. The Ambassador emphasised the fact of how water looms large not only in Bangladesh, but also in the global scope of challenges across South Asia and the world. He cited a newly published report on global water security by the US Government when making the case for water as a critical issue that will increase regional tensions and put a great impact on national security. He emphasised how arsenic is focused as “the one key aspect of water in the Bangladeshi equation of life,” and that the other emerging issues such as salinity must also be considered when tackling the water crisis in Bangladesh.

Such interdisciplinary dialogues are crucial in understanding the full breadth of issues that stem out of the arsenic crisis, and underscore the need to work across a multitude of sectors in finding a way forward to overcome the crisis. To sum it up, the willingness to have such a diverse group of stakeholders to work together was itself a promising development, and the conversations that ensued helped to sow the seeds to a fresh approach to mitigating the arsenic crisis.