The world has just witnessed the birth of South Sudan. During this historic time, we thought we would share this letter from our colleagues Nicola Banks and Munshi Sulaiman working at BRAC, the world’s largest development organization which has been working in South Sudan for the past three years.

The world has just witnessed the birth of South Sudan. During this historic time, we thought we would share this letter from our colleagues Nicola Banks and Munshi Sulaiman working at BRAC, the world’s largest development organization which has been working in South Sudan for the past three years.
“I will start a new life in a new country” was the first response we heard from the people of South Sudan in Juba after our arrival. We are here to share in the celebrations for the birth of the world’s newest nation, and to see how our organization BRAC can contribute to meet the challenges of this war ravaged country. These words are illustrative of the hopes of a new beginning that the dawn of Independence will bring to the South Sudan on 9th July, making it the 54th country in Africa, and the 6th member of East Africa. 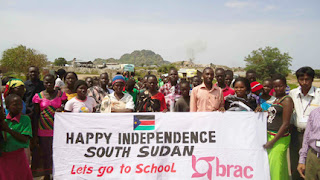 “It was through a mixture of ballots and bullets that we have attained our hard-earned independence” reads one of the many banners hoisted around the capital city, Juba, in preparation for the 9th July. The recent conflict, even with the six years of relative peace and development since the signing of the Comprehensive Peace Agreement in 2005, remains at the forefront of Independence, The country and its people have paid a heavy toll. The war and underinvestment in public services is ensuring that the country will start its new beginnings under trying conditions. South Sudan will be one of the poorest countries in the world, with around 90 percent of its population living under $1 a day. Jobs are few, and skills and qualifications are fewer, making it extremely difficult for the huge majority to etch out a living.
Regardless of these challenges, the unbridled optimism of this new beginning was striking as we took to the streets of Juba to ask the citizens of this new nation what Independence meant to them. “Everything will change now”, explained one university student, and these sentiments were common to many. While the old country was associated with struggle and suffering, many spoke to their belief that their new-found freedom would bring investments in infrastructure, education, health, and industry, and that this would bring jobs – and therefore livelihoods – to the citizens of the new South Sudan.
While there are excitements all around, there are also important differences in anticipations between the few educated and vast majority of the poor. The unadulterated joy at Independence apparent amongst the educated citizens of Juba was not matched among the poorer and less educated BRAC beneficiaries whom we asked similar questions. Their joy was accompanied with some level of apprehension about the tangible improvements they would see in their lives. Education, employment, and security were the three key priorities that everyone talked about. These remain a momentous challenge for any government, especially in one where spending on army and government salaries takes the lion’s share of government expenditure.
As well as a lack of formal education, the decades of conflict meant that all jobs were impossible and that skills have been out of use and forgotten. Under the shade of a mango tree in Juba University, Mayai, a university student there, explained that the extent and depth of poverty in his country was due to the fact that all forms of employment opportunity were wiped out during the war. People could not invest time or income in agriculture, and opportunities for business were impossible – it was impossible to move freely and safely even within the country, let alone travel outside to Kenya and Uganda in order to source goods for sale. Even if you had skills, therefore, there were no options through which to use them, and this has meant that after more than two decades, skills and knowledge are lacking. 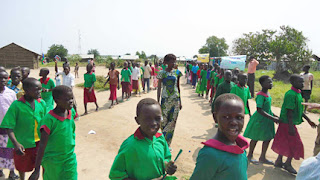 More alarmingly there is an entire missing generation of youth that have been left without education or skills. Providing skills training and employment opportunities for them will be key to escaping poverty. As Pastor Gabriel of the Episcopal Church of Sudan explained to us, “The eldest people are now leaders and now the younger at school, but there is a big gap in the middle. How can these people use the free environment to their benefit?” For the people of South Sudan to be able to fill this gap will require a mix both of skills development alongside job creation if the people of South Sudan are to be able to take advantage of the new nation and its benefits.
People also spoke of their fear of the relative unknowns that may make their lives more vulnerable after Independence. Businesswomen spoke of their worries of increased prices due to restricted exports from the North, and adolescent girls from one of BRAC’s Adolescent Girl Initiative clubs were also worried about security, perhaps these apprehensions are a good thing. If Independence was accompanied only by expectations of an overnight transformation, this could well lead to greater disillusionment when hopes are not immediately met. But one thing everybody hopes, will change is that they will now have a voice. As female entrepreneurs from BRAC’s microfinance programme highlighted, after decades of rule without a voice, the birth of a new nation will also usher in a new form of rule in which the citizens count – “We will see who is bad and who is good”, they explained, “If someone is not good, we have the power to change them”. This level of optimism is striking considering the trauma of the war is still so fresh.
We went to visit one of the 245 non formal primary schools BRAC South Sudan now operates. The children are too young to understand or remember the causes of the war, but the implications of the war and independence were etched strongly in some of their minds. To one small boy, the war is represented as the day his parents forgot him: when his village was raided, many were killed and the rest fled. In the chaos, his parents left him behind. Another girl explained that she had only learnt she was living in Uganda when some LRA fighters attacked their refugee camp – after that her mother told her the history of the fighting, but she did not understand what people were fighting over. They all said that they will be very happy on the 9th of July, because they can raise the flag up. When we ask them what Alfa Alum (Raising the flag) means to them, several groups said that this means there will be no more killing of civilians, while another two groups talked about separation and the fact that this means that the people of South Sudan will now be recognised. 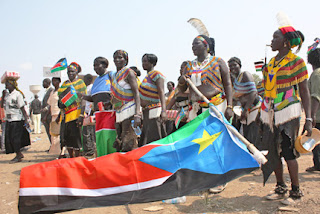