This spring, Daniel Ng was the winner of BRAC’s first Facebook Innovation Contest.  He visited us in August to work with the Social Innovation Lab on advancing his idea.  His reflections are below.  You can watch his submission video and final presentation on the BRAC youtube channel.

This spring, Daniel Ng was the winner of BRAC’s first Facebook Innovation Contest.  He visited us in August to work with the Social Innovation Lab on advancing his idea.  His reflections are below.  You can watch his submission video and final presentation on the BRAC youtube channel.

Earlier this year, BRAC ran a competition through Facebook to find innovative ideas with the potential to “change the world to a more inclusive and equitable place”.  I sent in a proposal to build community playgrounds in Bangladesh, one next to each of BRAC’s primary schools, with the goal being to create safe, accessible places for underprivileged children to play. Even now, I can’t believe BRAC chose my idea. A disbelief not because of any weakened conviction about the importance of protecting play, but because of wondering, Why me? What does the world’s largest NGO want with me, a first-year undergrad from Virginia who is clearly not Bangladeshi? Whatever the reason, I packed my bags, flew to Bangladesh, and walked into BRAC’s 20-story beehive of an office with nothing but good intentions and high hopes that BRAC would implement my plan soon. Obviously, I still had a lot to learn. Over the next one and a half weeks I worked closely with BRAC’s Social Innovation Lab to better understand how my idea could fit into BRAC programming, especially its Education Program. One of my most memorable and humbling experiences during that time was when I got the opportunity to “visit the field,” so to speak. The “field” turned out to be an urban region called Kumkumari, Savar located about 30 km northwest of Dhaka city. I was taken there to observe a pilot project BRAC is currently running to promote outdoor recreation. Since the beginning of 2012, BRAC has been piloting a project to incorporate outdoor play activities into its primary education program. Every Thursday after class, BRAC teachers lead their students to a nearby field to engage in 1 hour of semi-structured outdoor play. So while not to the rural, agricultural area I had in mind, my “field visit” ended up being exactly that, a visit to a field.

Speaking with participants of the pilot program, though, I quickly began to realize just how inappropriate and unfeasible my playground idea really was. First of all none of the students, parents, and teacher I interviewed knew what a “playground” was. The concept of a playground as a space filled with equipment to play on was as foreign to them as I was. To the community members of Kumkumari, a “playground” is any field where children can run around and play games like football or kanamachi (a blindfolded version of tag). Building a Western playground in the community would not only be insensitive to their culture, but also irrelevant to their existing needs. 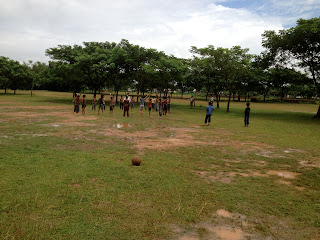