A haor is a permanent marshland, distinct to the North-eastern Bangladeshi region of Sylhet. Although most would say the famous tea gardens are iconic here, they only comprise of twelve percent of the region, while a massive 30.2% of Sylhet is permanent marshlands.

Disregard the adverse conditions and isolation; people have managed to live in the haors of Sylhet for hundreds of years. One gets around by boat in the haors. Unfortunately, the distance of settlement to settlement often creates massive isolation.
One of the biggest problems here is easy access to education. School age children in the marshlands often are faced with the difficulty of huge distances in travel to school. Often the nearest schools will be around two miles. Many simply do not go. That is where BRAC Innovation comes in.

We created the concept of Floating Schools for children in this region. Consequently, education is brought to them. Dholerpur village, was the sight of our latest inauguration.

Newly admitted students named MuktaRani Das (10) said: “I am very happy to attend this school. We had never thought of going to school as the nearer primary school is two miles away.“.

We sadly encountered a few parents and found that they were not aware of the laws regarding mandatory school attendance for children. 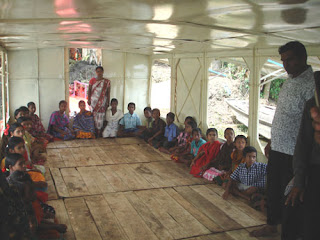 Tapoti Sharma, BRAC Primary School teacher said that she has 30 students in her class and among them, 20 students are girls and ten students are boys.

On 26th September 2011, BRAC Education Programme launched two primary schools on boats in two villages: Dhorerpar and Rahamatput  Each boat will pick teachers and 30 registered students from nearer ‘hati’. After finishing class they will be dropped in their home.

At the launching event, Dr. MahbubHossain, Executive Director of BRAC said, “BRAC works to support government. Our values are reflected in our work.”

Muhammad Yamin Chowdhury – Sunamgang District Commissioner was present there as Chief Guest Safiqul Islam  and other well-known locals were present in the event.

The Sylhet region has flash flood problem. In these flash floods, water level rises and falls quite rapidly with little or no advanced warning.. Children as well as teachers face trouble in reaching schools. Fishing often becomes the last resort for most of these “trapped” villagers.

Economic deprivation and social inequalities arising from their geographical isolation keeps children away from school and education. In a research by Education Watch in collaboration with BRAC it is found that compared to 38.5% overall in Sylhet division.. The head teachers reported that over a fifth of the students had to face bad transportation during dry season that doubled in the wet season.

According to research statistics, 42% of the villages in Sylhet have no primary schools. In terms of literacy rate, also it lags far behind the national average. The literacy rate for 7+ populations is 40.7% and for adult population it is 44.4% but the national rates are 48.5% and 52.1% respectively.

Assisting and alleviating those plagued by marginalization, be it through natural or social constructs; is a fundamental principle of BRAC. We believe in the necessity of education especially in communities with weak infrastructure. For us, education is one of the biggest weapons in the fight against poverty, ignorance, and opportunity shortage. Consequently, we invest heavily into our educational facilities.  At our schools, 1.2 million students are currently enrolled, most of them being female students.  So far, almost 5 million children have graduated and received basic education from these schools, while nearly 95% continue on to secondary schools.