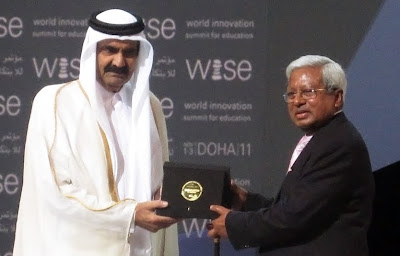 
On November 1, 2011, His Highness Sheikh Hamad bin Khalifa Al-Thani, Amir of the State of Qatar presented Sir Fazle with the prize, which is the world’s first major award for education, before 1,300 delegates at the opening session of the third World Innovation Summit for Education (WISE).


For this inaugural edition, following a pre-selection by a Committee, a prestigious Jury selected Sir Fazle as the inaugural Laureate. Sir Abed received an award of $500,000 (US) and a specially designed gold medal, bearing the word “education” in over 50 languages.

In his citation of the Laureate, WISE Chairman H.E. Dr. Abdulla bin Ali Al-Thani said: “Fazle Hasan Abed’s life and career embody the values of WISE. He recognized that education is a passport to social inclusion and opportunity. He discovered a successful formula, and he adapted and expanded it – first in Bangladesh and then in other countries. As a direct consequence, millions of people around the world lead healthier, happier and more productive lives. His vision, resourcefulness and determination are vital ingredients of the innovation process and he stands as an example to all of us who believe that education, more than anything else, determines the destiny of individuals and societies. The Jury saw him as an ideal WISE Prize Laureate.”

In acceptance remarks, Fazle Hasan Abed said: “I thank the Qatar Foundation for instituting this magnificent Prize and for honouring me and BRAC with its first instalment. It is on behalf of the 120,000 BRAC staff and school teachers that I humbly accept this prize. I have discovered time and again in my four decades of work with BRAC that education is the fundamental catalyst for change.

It is easy to get overwhelmed by the large numbers. But we must always remember that the changes happen in individual lives and families. Many of the graduates of BRAC’s non-formal schools have gone on to receive University degrees and have become Doctors, Lawyers and Engineers. One girl has gone on to win Bangladesh’s version of American Idol. These young people may have achieved different things in their lives but one thing that they had in common – education has unlocked new opportunities for all of them.”