Hope in the middle of complexity: Working with the urban poor

During the Social Innovation Lab’s last field trip to Hazaribag – a very poor area on the edge of West Dhaka– the team met Feroz (on the far left of the picture, wearing an orange lungi) a rickshaw-puller in his early thirties.His wife and three children are still in their home district of Rongpur. 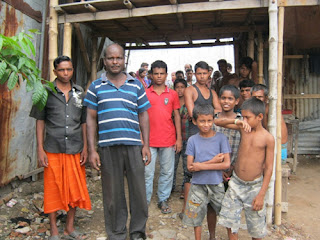 During the Social Innovation Lab’s last field trip to Hazaribag – a very poor area on the edge of West Dhaka– the team met Feroz (on the far left of the picture, wearing an orange lungi) a rickshaw-puller in his early thirties.His wife and three children are still in their home district of Rongpur. He earns about Tk. 300 (U$ 3.75) a day on average, most of which he remits back to his family. With insufficient funds left to cover his daily expenses, Feroz lives on top of the garage where the rickshaw is parked.

The rickshaw he rides belongs to the garage owner (also pictured, standing next to Feroz) who takes a cut of his daily earnings. In return, he allows him to stay overnight at the garage. Feroz’s linkages with Rongpur are not limited to just sending money to his wife and children, but include strong ties with his extended village family and networks. On top of returning to his home town almost every two to three weeks, he also pays periodic visits for festivals or seasonal work.

With his current level of income, he cannot afford to bring his family to Dhaka, although this might create an opportunity for his wife to work, as there are many more jobs available for women here. Even if he manages to do it, the first economic shock may force him to send his family back.

Feroz is one of over 300,000 migrants that Dhaka city receives each year.Keeping his case in mind, let’s look at a few questions. Is working with the urban poor harder than working with the rural poor? Is there a need to design development programs specifically for urban communities and contexts? Concepts of family, neighborhood, ownership and belonging change dramatically once rural people migrate to urban areas. And the context, the associated needs and challenges vary from slum to slum, street to street and pavement to pavement. So how does one define urban communities and the places where they live? When people are floating, or constantly moving between their home village and the city, how can BRAC track and support them continuously?

These are not abstract questions. More than 35% of Bangladesh’s urban population lives in low-income settlements, or bostees, and directly contribute to its formal and informal economies. While many work without formal recognition (or protections) as street vendors, garment factory workers, rickshaw pullers, and maids, their activities play an essential role in supporting the more glamorous work that the better educated and better connected do. But this is hardly ever discussed, let alone appreciated.They are forced to live uncertain and miserable lives in slums like Korailwhere they pay rents that are higher, per square-foot, than some of the most posh neighborhoods in Dhaka but are deprived of even basic amenities like access to safe drinking water and proper sanitation. Indeed, in the Hazaribag slum that we visited, where all of the inhabitants are waste collectors working for the City Corporation, most of the garbage that the slum dwellers collected across the city is dumped right back in their front-yards! This is just one example of the new types of inequities that are rising as the numbers of people moving to cities continues to grow.

Many believe that urban slums lack the social cohesion of rural villages that creates a sense of community and social capital.  In this slum, we found an exception: Almost all of the families living here knew each other and many are even related! So, not only can they be defined as an occupation-based group, like Feroz, they also retain a strong sense of their rural community.How should BRAC think about the identity of individuals like Feroz or others living in this neighborhood?  Already we are working in slums and confronting many of these issues programmatically.  Read more about some of our insights in a recent publication, “Building to last: creating a platform to tackle urban poverty.”