Child sexual abuse is a silent epidemic, and statistics show it is only getting worse. What can we do to help our children understand the difference between a good touch and a bad touch? A good start is a 20-minute conversation.

Eight-year-old Shapla* was visiting the local tailor in her village in Dinajpur, northern Bangladesh. The tailor wasn’t a stranger, Shapla saw him frequently. He offered her chocolate while taking measurements for her school uniform. While Shapla was distracted with the chocolate, the tailor grabbed her and tried to molest her. She screamed, escaped from the shop and ran home.

It was estimated that up to 1 billion children aged 2-17 years experienced physical, sexual, or emotional violence or neglect globally in 2015. A study in Australia showed that, of 1.4 million adults who were abused in childhood, 85% of them were abused by someone they knew, often a close family member or parent.

These statistics, like any statistic about child-related crimes, are unlikely to represent the whole picture. Children, particularly those who are very young, are often unaware of what abuse is. Even if they do realise a behaviour as abusive, confusion or fear often hinders them from disclosing the incident. If they tell anyone, their voice is often silenced, because of disbelief, fear, shame or stigma – or because the people hearing simply don’t want to know, or don’t know what to do with the information.

In Bangladesh, 1,383 cases of rape and harassment of children were reported in 2019, a 76% rise from the previous year. Sexual and reproductive health education is included in Bangladesh’s national curriculum from grade six, but teachers often skip the topic entirely.

“There was a chapter about sex chromosome and sensitive parts of the human body when I was in grade nine,” says Moin Ali, a university student in Bangladesh, “We were curious to learn but our teacher didn’t cover that chapter – she asked us to read it at home, and memorise answers for our examination”.

Shapla’s reaction when she was attacked by her tailor was different, though. She screamed. She ran. She raised her voice and told her mother, who took action.

Shapla’s reaction was a result of what she learnt at school, through a 20-minute conversation facilitated by her teacher as part of a regular lesson. Shapla was taught, as part of a specific module in the curriculum, to understand the difference between a ‘good’ touch and a ‘bad’ touch, and what to do if she felt like she was in danger.

The conversation was backed up by a similar conversation that took place during the regular parents’ meeting. The teacher explained to parents how to respond with empathy if children share incidents of abuse.

These student-teacher and parent-teacher conversations are a regular part of the curriculum at BRAC’s schools, designed to equip children and their parents with the knowledge and awareness to understand their own bodies, identify dangerous interactions, and get help.

Breaking taboos inside and outside classrooms

Every second month, Shapla’s teacher leads a 20-minute-long session with her students, aided by a video and posters. The session defines which parts of the body are private, and what to do in an unsafe situation: say no, run away, and tell an adult they trust. 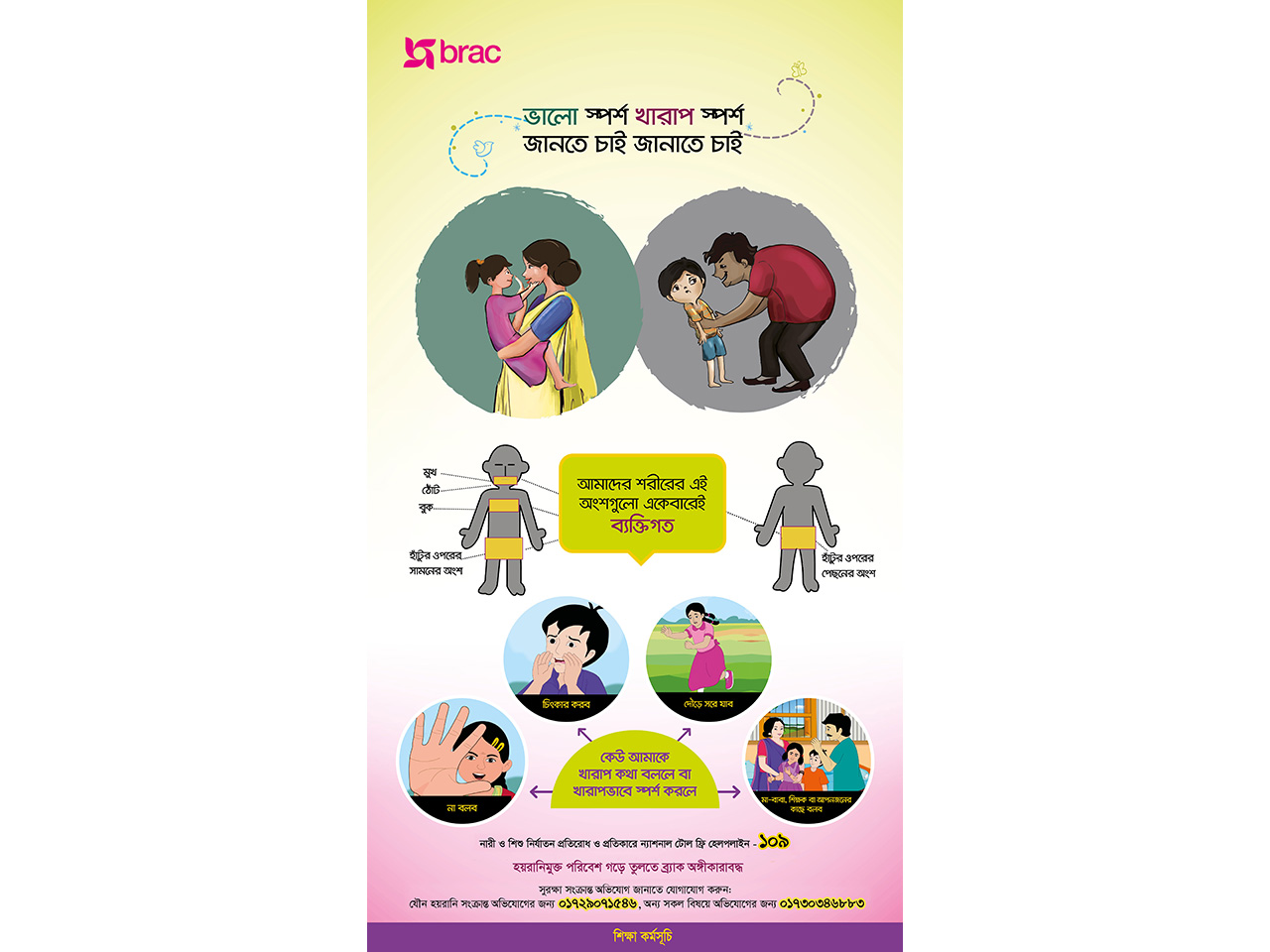 The basic message is simple: a good touch feels safe and caring, a bad touch feels scary and uncomfortable. In reality it is much more nuanced than that though, especially when bad touches come from people who are supposed to provide safety and comfort. When these conversations take place continuously and regularly,  children have the chance to explore these nuances and ask questions to deepen their understanding. When that knowledge is supported by continual teacher training and awareness-building for parents, it creates supportive environments for children to speak up. Teaching children about body autonomy – their right to govern what happens to their body – can have significant impacts on child sexual abuse and harassment.

“There was a lot of shyness among children at first, especially when discussing private body parts. But they started feeling more at ease as discussions progressed, and were curious to learn more.” says Marzina Khatun, Manager and Gender Lead at BRAC Education Programme.

The module was first piloted in BRAC in 2012, as part of a wider project to combat violence against women and children. Surveys from the pilot phase revealed that children were more likely to report abuse and harassment after the training. Teachers reported that students were more likely to stand up for themselves in the face of harassment on the street. Girls reported that they were standing up for themselves in public spaces more often, where previously they would have kept their eyes down and just walked quickly away.

In 2018, all BRAC schools in Bangladesh adopted the module. Even during COVID-19, approximately 165,000 students – and their parents – learnt about how to protect themselves and create a safer community. The module is now being scaled up by other organisations. Students watch video on ‘Good Touch and Bad Touch’ in BRAC school in Bangladesh. *The photo was captured before COVID-19 © BRAC

We need to talk to children

A wide range of resources are available to strengthen awareness around child abuse. INSPIRE, created by the World Health Organization, identifies a group of strategies that have shown success in reducing violence against children. In Nepal, the Choices curriculum promotes discussions between 10-14 year old children. Young men in India participating in the Yaari-Dosti campaign were 20–30% less likely to perpetrate intimate partner violence.

Initiatives to stop child sexual abuse must be widespread across curriculums, target children of all age groups, and focus on creating an enabling environment where children learn about consent and their right to safety. The statistics make clear that we have a lot of work ahead to eliminate child sexual abuse, but evidence from many initiatives highlight change is possible. BRAC’s work with students like Shapla shows it can start through an initiative as simple as a 20-minute conversation. We all need to play a role in making that happen – we owe it to our children.

*Names have been changed to maintain confidentiality.

BRAC started working in education in 1985. Its high quality, affordable, scalable schooling model has made it one of the world’s largest providers of secular, private education. Its holistic approach to lifelong learning, addressing educational needs from early childhood to higher academic levels supported over 15 million students across five countries to graduate to date. To learn more about BRAC’s approach to investing in the next generation, visit the Education Programme’s website. Find more blogs on what BRAC is doing in education on The Good Feed. Skilling the youth in a pandemic