On April 4, one of the largest forceful slum evictions in Dhaka’s history took place in Korail bustee, located near BRAC’s head office. Households and shops within twenty meters of the road were bulldozed, with approximately 2,000 structures affected. On April 4, one of the largest forceful slum evictions in Dhaka’s history took place in Korail bustee, located near BRAC’s head office. Households and shops within twenty meters of the road were bulldozed, with approximately 2,000 structures affected. Homes lay in complete ruin, while those who could salvage some of their belongings camped on the local field or the road itself. “Our water supply was cut off and we have no place to go” explained one of the affected women. “The way the whole process was carried out was very inhumane. We received an announcement on April 3rd and the next day morning, the eviction began. We were given just one night to dismantle our homes, gather our belongings and relocate ourselves. Where will we go?” says another victim. There are unconfirmed reports of at least one child who died, trapped inside one of the destroyed shacks. Local shops and bazaars, the main sources of food for the community, were closed. 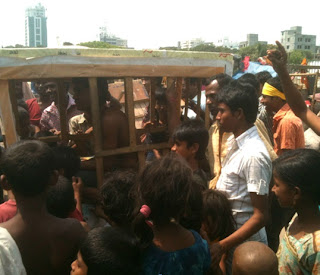 BRAC’s community-based health, microfinance, and education programs have been working with Korail’s residents for many years. Thus far, it has been confirmed that eight pregnant women covered by the Manoshi program and approximately 10 BRAC primary school students were affected. The Korail eviction is part of a larger eviction campaign taken on by the government, which started in various parts of Dhaka five days ago. In January, the High Court directed the government to demarcate Gulshan Lake and remove all illegal structures, which will include the homes of the approximately 30,000 slum dwellers. Dhaka’s District Executive Magistrate has committed to completing the eviction by June, with the next drive on Sunday. “We have created a structure where there is no place but slums for low income people to live. They are the engine of the informal economy and yet the State likes to pretend that they don’t exist and this is the result of that indifference”, said Asif Saleh, Director of Communication, BRAC. It is estimated that if Sunday’s eviction is carried out as planned, 396 BRAC primary students, 345 pregnant women and 352 Village Organization (VO) members will be homeless. Despite existing policies requiring evictions to include rehabilitation for slum dwellers, none has been provided. Local NGOs reported that “water, food, and a place to go” were the primary needs they identified. Thousands participated today in a peaceful protest to the eviction plans. BRAC is planning to provide a small cash transfer for 400 households that were directly affected by the eviction. But without increased attention to the lives affected by these evictions, the ability of BRAC and other NGOs to prevent the resulting misery is quite limited.

“However technically legal the form of the eviction may have been, nothing can justify the fact that the manner and spirit in which it was carried out was fully devoid of humanity. No adequate advance notice was given, no compensation mentioned – and rehabilitation is so distant and unreal a dream that no one even utters it. What a mockery of constitutional safeguards of life, livelihood and shelter.”

Dhaka is home to over three million slum dwellers, all of whom reside in what are considered illegal structures. According to a research done by the Department for International Development (DFID), at least 60,000 people were displaced due to the evictions from 27 slums in Dhaka between 2006 and 2008. Bangladesh’s success in reducing poverty is threatened by forceful evictions that disrupt communities, destroy livelihoods, and uproot families. BRAC is committed to supporting its community members in Korail with emergency support, and supporting the development of sustainable and humane urban policies. Venita Subramanian & Maria A. May BRAC Social Innovation Lab

Excellent report, we have linked it on our webpage. We have also made a video which shows how vibrant Korail was before this eviction. Let us know how we can help. We have made lots documentaries in Bangladesh. We spent 2 years filming a documentary with a family in Korail.