We are currently in the midst of an important week for BRAC’s Road Safety Programme, in particular its newest, most attention-drawing, yet perhaps most potent component for bringing about social change – the BRAC Driving School 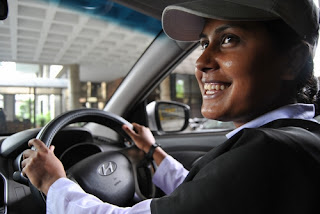 We are currently in the midst of an important week for BRAC’s Road Safety Programme, in particular its newest, most attention-drawing, yet perhaps most potent component for bringing about social change – the BRAC Driving School, which opened its first branch in May this year, with plans to scale up and establish branches across Bangladesh soon following a recent MoU signed between the Bangladesh Road Transport Authority (BRTA) and BRAC.

At the moment though, the one inaugurated amid much fanfare and excitement earlier this year in Uttara’s Ashkona, within the sprawling compound of the BLC – BRAC Learning Centre, for the uninitiated – remains the only one of its kind. And it is there that the 21 young women comprising the inaugural batch of the BRAC Driving School took their driving license tests on Saturday in the presence of BRTA officials. All 21 passed their tests with flying colours. It is hoped that they will receive their licenses from BRTA soon after a certificate-handover ceremony is held at BRAC Centre on Tuesday, September 18.

Ashkona is also where the students were based for the first 4 weeks of the 8-week residential  course the school offers to men and women from the youth segment of the population. The 100% female intake for this inaugural batch will certainly please Communication Minister Obaidul Kader, who had extolled the potential virtues of women drivers over their male counterparts while attending the school’s May inauguration as chief guest. He will perform that role once again on Tuesday. 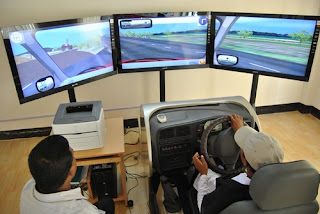 During the first 4 weeks of their residency in Ashkona, learners undertake 24 days of basic driving training, inclusive of interactive and theoretical classroom sessions. Admitting just 21 students per batch has helped keep the teacher-student ratio very healthy, and a visit to the  3rd floor of the BLC reveals a well-fitted out classroom, with various tips accompanying images hanging from the walls relating to driving skills, road safety rules and regulations, and automechanics. But the real learning, at the wheel of one of the white sedans, takes place on the driving range, which is located on a vast stretch of sand-filled, uninhabited land. At least one part of it is really quite picturesque, washed by the waters of one of the Turag River’s many small tributaries. 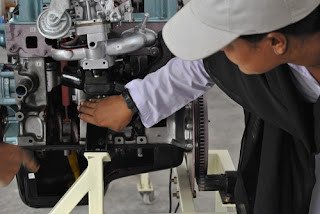 For the last 4 weeks, the students had been posted at 75 Mohakhali, where they were each attached to an older, more experienced BRAC driver on assignment to get a taste of what driving really entails on Bangladesh’s mad, bad roads.  During this period, they were resident in quarters maintained by BRAC in Niketan. The design of the courses is likely to change in future – in particular the attachment component –  to accommodate more opportunities for the students to “learn by doing” in future, since it was found that many of the older drivers were apprehensive about handing their charges the wheel while on assignment. That is not to say they weren’t encouraging. On Thursday, during a visit to the basement at 75 Mohakhali, where there’s a room for all the drivers to hang out and relax, we found older and younger drivers mingling freely. 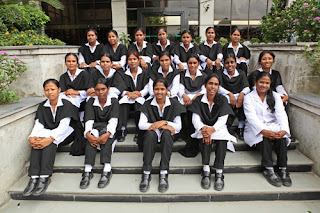 One thing about these women is the strength of their resolve that comes through every time you speak to them. All aged between 20 and 22, none of the 21 had lived in Dhaka before, so that in itself constituted a big adjustment. Their stories were all pretty similar – typified by hard-up lives in the rural areas, and the dream of easing some of the hardship faced daily by them and their families by bagging a nice, respectable job. Everyone we spoke to was dead serious about what they wanted to do with what they had learned. Not for them the driving-as-hobby/leisure that you sometimes find in the members of usually chauffeur-driven middle-class families. They were well-versed on a government initiative to hire 600 women drivers, obviously attracted by the security of a government job. All 21 of them (and some others currently enrolled in the second batch, who we met in Ashkona) were sure about wanting to put their learning to use professionally. That is what had brought them together in the first place from places as far-flung as Gorahat in Dinajpur and Kawakhali in Rangamati to the doorstep of the BRAC Driving School. On Tuesday, as they exit the doors with their heads held high, and their hard-earned certificates in their hands, we certainly hope they can do so. Something tells us they will too.

I like it so much, please try to keep posting.

Let me introduce other material that may be good for our community.

Congrats to my Dashing Girls!!! Feeling proud to see you all! Lots of respect and love to you all! Salute to my BRAC!
Ruby Areng,
Ex Employee of BRAC.