Close encounter of the BRAC kind-I

Couple of weeks ago, I had the opportunity to witness – for the very first time – a selection of BRAC programmes “in motion”, so to speak, from close quarters, out in a corner of the vast unknown that all of us cooped up at 75 Mohakhali know as the “field”. It must be all the news filling the airwaves about NASA’s latest Mars mission (not to mention the passing away of Neil Armstrong) but as I write this now, I must confess to being struck by some uncanny similarity between NASA missions to outer space being run from a control centre in California and BRAC programmes out in the “field” ultimately being directed from BRAC Centre.

Couple of weeks ago, I had the opportunity to witness – for the very first time – a selection of BRAC programmes “in motion”, so to speak, from close quarters, out in a corner of the vast unknown that all of us cooped up at 75 Mohakhali know as the “field”. It must be all the news filling the airwaves about NASA’s latest Mars mission (not to mention the passing away of Neil Armstrong) but as I write this now, I must confess to being struck by some uncanny similarity between NASA missions to outer space being run from a control centre in California and BRAC programmes out in the “field” ultimately being directed from BRAC Centre. Over the course of the next few days, I’ll try and relate some of my thoughts from this maiden trip, with a particular focus on each of the four programmes we engaged with. 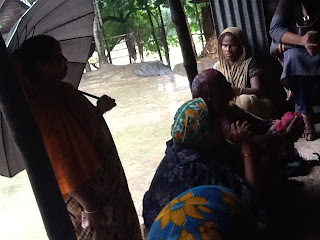 The rain forces a retreat indoors.

Now obviously nothing can compare with the sense of wonder evoked by never-before-seen images from space, and I won’t say anything I saw or learned during my first “field trip” broke the mould in that way. In any case, if anything about the kind of work BRAC is involved in retains the ability to cause jaws to drop or eyes to pop out, it would have more to do with the conditions they are meant to tackle I imagine, rather than anything inherent to the programmes themselves. But having grown up in Bangladesh, scenes of grinding poverty no longer retain their “shock value”, even though my life has been an orgy of luxury really, when compared to say those considered eligible to be part of BRAC’s programme for the “ultra-poor”.

That, incidentally, was one of the programmes on the menu for Snigdha Ali, who also joined recently as head of communications, and I to observe up close on the day we made our way to Manikganj, often described as the site of BRAC’s “mother programme”, where it all started  nearly forty years ago now (with the exception of Sulla), the Apollo 11 of it all. First up though, was the microfinance programme. I’m finding it hard to resist the temptation to draw the obvious comparison with Voyager 2, which as any space buff or fan of Hollywood will know, is NASA’s longest-running programme, kind of its bread-and-butter project. The extent of my past engagement with this rampart of the entire development sector ran to discussions with economists during my time in journalism, and before that, some lectures that covered the topic in my development economics module at university.

I remember well the period when just about everyone and her uncle was jumping on the microfinance bandwagon. Here at last was the answer to curing all the ills wrought by poverty, they all shouted from their rooftops. And by no means were all the voices Bangladeshi. Today of course, there is a relentless debate raging through the corridors of academia, the cacophony of the media, and of course, out in the field where all ideas meet, and only the good ones survive. The point of the debate is, or should be, to glean how effective microfinance really is, in achieving what must be conceded is a really tall task – the eradication of poverty.

But just as the advocates of microfinance could be held guilty for overestimating its possibilities in the past, today its critics are possessed of a stridency I find, that threatens to make us all lose sight of the real point of the debate. If we haven’t already. I myself hope to refine my own perspective, which lies comfortably between the two poles presented above, during my time at BRAC. Although I must say a belief in longevity as the true test of any idea’s credibility means I find myself much closer to the believers than the naysayers on this particular spectrum. Which is pretty irrelevant in of itself, but what cannot be denied is that Andhra Pradesh apart, microfinance has proven to be an effective-enough tool for fighting poverty to be replicated across the far corners of the earth (and would probably have made it to space, provided there was poverty holding back some extraterrestrial from realising its potential out there) following its advent in Bangladesh, and for the dose to be repeated a number of times over a number of years.

The outcome of this debate though, was the farthest thing from my mind that morning as we met the 21 members of a “village organisation” – for me, the really groundbreaking bit of the whole idea that underpins a banking model disbursing loans without collateral. If anything, it was the spurious nature of it all, the clash of egos and reputations that sullies the whole thing, that hit home as we sat and chatted in the front yard of Renu Begum, the leader of this particular group (all of them women, of course) by dint of an association with BRAC that goes back 14 years! It all started with a Tk 20,000 loan she took all those years ago to finance an enterprise selling bamboos. It went alright, she tells me, but she’s moved on since then, to bigger and better things. Today, she is servicing the debt on her 12th loan from BRAC, for the princely amount of Tk 1 lac, that she took to run a clothing business with her husband. It helps to maintain what seems to me a perfectly dignified existence for them, and their two children, who both go to school.

A similar thread runs through the entire group, whose easy camaraderie and sense of togetherness is plainly apparent throughout the time we spend in the yard, and later inside when it starts raining too hard. Most of them have taken out loans to finance enterprises run jointly with their husbands. Nobody states some outrageous number like six or seven when asked about their number of children. It’s a close-knit community, and there are probably few secrets between them. The loans go towards a variety of business, and they all seem to know pretty much where each stands in terms of repayment. They even go to the extent of helping each other out towards repaying the monthly installments, in the interests of preserving a clean chit for the entire group. Who needs physical collateral when you can devise a method whereby one’s reputation and sense of belonging within the community one partakes in is put at stake.

Probably the most poignant moment of the entire discussion for me comes when Snigdha apa asks the group if their role in garnering the loan to finance businesses where their husbands often do the running has helped them gain a more equal footing in their households. With a knowing smile, Renu Begum gestures towards the open window of her house, against which her husband sits smoking a cigarette, and chides him to answer the question. He says nothing, but the look on his face is telling: “I do my best, but is a wife ever satisfied?”