A huge number of media photographers piled into a seminar arranged by BRAC’s Safe Citizenship for Adolescent Girls Programme, “MEJNIN” on the September 13th, 2011. Due to the congestion caused by press personnel, it was difficult to spot the notable guests. 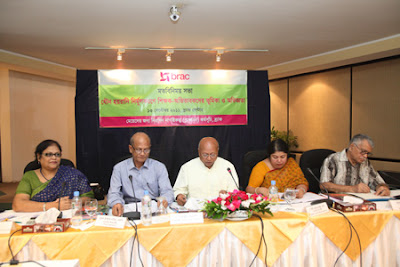 A huge number of media photographers piled into a seminar arranged by BRAC’s Safe Citizenship for Adolescent Girls Programme, “MEJNIN” on the September 13th, 2011. Due to the congestion caused by press personnel, it was difficult to spot the notable guests. The seminar was a closing event for the pilot MEJNIN Programme, which was initiated experimentally by BRAC’s Gender Justice and Diversity Unit last year. The program targets adolescent girls, and helps them build relationships with their parents and teachers, allowing them to effectively share their difficulties regarding the phenomenon notoriously called ‘Eve teasing’.

‘Eve teasing’ is a form of sexual aggression that can range in severity from sexually suggestive remarks, brushing in public places, catcalls, to outright groping. This phrase that misleadingly suggests harmless and even playful behavior, has led to the death of forty Bangladeshis this year. Twelve of those killed were family members of adolescent girls facing eve teasing. Twenty-seven deaths are attributed to suicide, and most girls at this age found it terribly difficult to live on a day to day basis with this type of harassment.

As discussions continued during the seminar, it became clear that those responsible for the deaths were not only abusers and bullies, but also the parents, teachers, relatives and the society at large. It is unnerving to think of the way social constructs affect our youth. Still now, when a girl faces eve teasing on her way to school or college, she not only faces shame from strangers, but carries that responsibility for that shame with her. Questions like, ‘why do you have to laugh so much?’, ‘why didn’t you cover your hair?’ and ‘why do you have to wear that dress?’ are the expressions they are typically subjected to from their own parents. Given the percentage of suicides versus murders, it is clear that outsiders are not the only villain here. Changes are necessary from within these girls’ families and the societies which harbor these notions.

This fact was exactly the focus of the MEJNIN programme which tried to create the space of comfort for the adolescents who face such harassment everyday. Director of the Gender Justice and Diversity Sheepa Hafiz in her introductory presentation mentioned how BRAC ran this programme to create this safe space successfully for 15,000 women in 60 schools of Dhaka. The education minister Mr. Nurul Islam Nahid, highlighting the importance of this space, said that he visited every family where a teenager committed suicide facing such anguish and he found out that inevitably in all those cases, when the teenager felt that her last refuge of comfort–her own family–was not receptive to her tribulations, that’s when she decided to commit suicide. The seminar attendees were unanimous in agreeing that change has to come from within these groups where the basic attitude towards women is that their independence is limited by their gender. 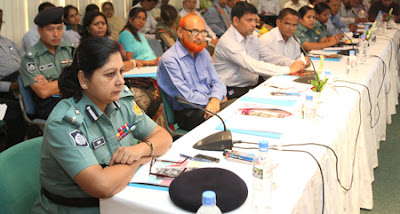 Mili Biswas, a female police commissioner and panel member of the MEJNIN seminar, expressed how difficult it was for her when she had taken a job as a police officer 20 years ago. As the only female officer in the Police, she was constantly questioned. The recruiting of women in Police stopped for 10 years after that until it was restarted again in 1998. Now the officer ranks of Police boasts almost 200 women. She mentioned that nowadays, she could see changes occurring and they can accept more challenging and important jobs. Minister Nahid echoed her statements and said that change is a gradual and longstanding process and one only has to see the progress in the last 15 years to see how things have changed for women in Bangladesh. As gradual as these changes are, she mentioned that nothing brings change faster than economic empowerment.