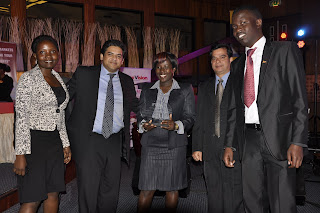 In his acceptance speech, Mr. Rahman thanked partners like the MasterCard Foundation for allowing BRAC to bring $100 million to Uganda for its development programmes and accepted the award on behalf of BRAC Uganda’s 125,000 borrowers.

BRAC Uganda was recognized for achieving excellence in financial reporting among NGOs operating in the country. The FiRe Awards team, comprising the ICPAU, the Capital Markets Authority (CMA) and the Uganda Securities Exchange (USE) organised the annual competition to promote compliance with the best standards of financial reporting. The ICPAU accepts and encourages the use of International Financial Reporting Standards (IFRS) among organisations operating in Uganda. IFRS is an accounting standard designed as a common global language for business affairs, allowing for understandable and comparable company accounts across international boundaries.

The FiRe Awards committee considers transparency, corporate governance, compliance with IFRS, and sustainability, among other criteria, in choosing the winners of the financial reporting awards. 47 organisations submitted copies of their latest annual report for review and BRAC Uganda emerged as winner in the non-governmental organisations category, taking the top prize in this category for the second year in a row.Speaking after the ceremony, Mr. Businge, who manages a team of 180 accounts and finance staff at BRAC Uganda, said, “This award is recognition of our hard work as a team and validation of the values we stand on, mainly transparency. That this was clearly demonstrated in front of our peers and dignitaries in Uganda means a lot to us. Now other organisations are asking for consultations so they can learn from us. We are setting a standard that other NGOs can follow.”

Making the keynote address of the evening was the Hon. Minister of Finance, Planning and Economic Development, Ms. Maria Kiwanuka, who urged transparency and accountability in the profession and encouraged more organisations to adopt sound accounting practices.

This was very nice to develop such a nice website.