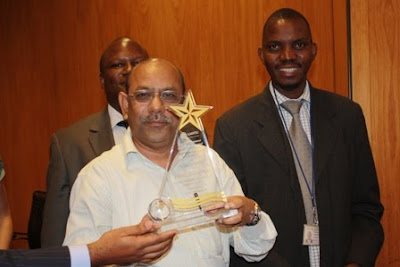 With global recognition that microfinance institutions should be placing emphasis on social as well as financial goals, the Association of Microfinance Institutions of Uganda (AMFIU) gathered representatives from microfinance institutions across the country for the first Social Performance Management Awards on September 27, 2011. This aimed to create awareness and promote social performance management across Uganda’s microfinance industry and to identify whether microfinance service providers are meeting their individual goals of poverty reduction and empowerment.
A number of microfinance institutions were recognized for their efforts in integrating social performance management into their operations. After the bronze and silver awards were distributed, Khondoker Ariful Islam, Country Representative of BRAC Uganda was called to accept the only Gold Award for “Outstanding Recognition in Implementing Social Performance Management”. While through its partnership with the MasterCard Foundation, BRAC has emerged as the largest and fastest-growing microfinance providers in Uganda, this Award reinforces BRAC’s commitment towards maintaining its focus on social performance and poverty alleviation.
The audience warmly received his heartfelt speech that touched upon the successes and challenges that BRAC Uganda has experienced in Social Performance Management, and stressed that above all, BRAC’s achievements are based upon our role as a learning organization, that through its coordinated system of program management, monitoring, auditing and research departments strives to learn everything about our microfinance programs – including what works, as well as what doesn’t. Only this way, he said, can we be confident that as an organization we are meeting our target clients of poor rural and urban women, as well as being aware of and responsive to the needs of our over 100,000 borrowers across the country.
The speech was particularly poignant, considering the Mr. Islam would be soon departing Uganda to take over as the Country Representative of BRAC Afghanistan. As the Country Representative Mr.Islam had played an instrumental role in launching BRAC Uganda – growing it to become one of the largest microfinance institutions in the country. In a span of four years, BRAC Uganda has disbursed more than $71 million in loans through its network of 94 branch offices. It has also scaled up Health, Agriculture, Adolescent Development and Education programs. Under Arif’s visionary leadership, BRAC has emerged as the largest non-profit organization in the country, employing more than 1,800 people and touching the lives of 1.8 million poor people in Uganda.

AMFIU, the Commissioner of Microfinance, and representatives of other MFI’s thanked him for the huge contributions that BRAC has made in Uganda under his leadership over the past six years, changing the microfinance landscape in scale, poverty outreach, and reputation. Although secretly hoping that he would take up one of the many offers he has had for Ugandan citizenship, the team at BRAC Uganda are immensely proud of him and wish him the best as he takes his many strengths of leadership, honesty and dedication to Afghanistan.