Book on BRAC soon to be released!

Like many of BRAC’s programs, its community-based model for TB has garnered much praise: it’s been profiled in articles in the New York Times, documented in Harvard Business School case studies, received the Stop TB Partnership Kochon Prize, and hosted dozens of distinguished visitors. 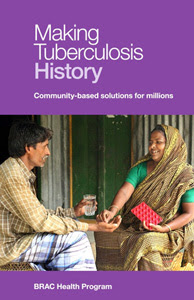 Like many of BRAC’s programs, its community-based model for TB has garnered much praise: it’s been profiled in articles in the New York Times, documented in Harvard Business School case studies, received the Stop TB Partnership Kochon Prize, and hosted dozens of distinguished visitors.Some of its methods have brought them under fire, within conservative communities, with the public sector, and international donors—it was one of the first to treat patients with lay volunteers (called shasthya shebikas), all women, in the community.And while medications have always been provided for free by the government, BRAC requires patients to hand over a small deposit prior to beginning treatment that’s returned only when the patient completes the six months of treatment (this can be paid by the community or waived when necessary). Shasthya shebikas watch the patients take their medications every day (a strategy now called directly observed therapy, short-course or DOTS) at their homes, receiving a small payment upon treatment completion. When pressured to change its delivery strategy, BRAC has refused, with one argument amply supported by program data and rigorous research studies: this model works.With adherence as an Achilles’ heel for treating infectious and non-communicable disease alike, BRAC found a way to engage patients and motivate them to continue the full course of treatment, defended it, and then scaled up to one of the largest programs in the world.Now a critical member in a national partnership with the Government of Bangladesh, over 40 other non-governments organizations, BRAC treats close to 100,000 patients a year with a success rate of 92%, defying the assumed trade-off between quality and scale.These achievements reflect significant contributions from many, including technical expertise from the World Health Organization and the Japanese Anti-TB Association, and resource mobilization by the Country Coordinating Mechanism, and transcend national borders.Internationally, BRAC has begun to adapt the model to new contexts.BRAC Afghanistan has worked with the government to make community-based TB treatment options part of the standard package of health services offered nationally.

Since its first write-up in a scientific newsletter in 1991, BRAC has published several academic articles on its successes in tuberculosis.It has even written chapters on the program in Tuberculosis: an interdisciplinary perspective and more recently, in From One to Many, a collection of programmatic experiences in scale up edited by BRAC. Ian Smillie dedicates a chapter of his book on BRAC, Freedom from Want, to tuberculosis control. But a thorough, reflective documentation, one capturing the broader elements of the history, collective insights, support systems, strategic thinking, and overall, the story of what had built the program, written by its veteran leaders and staff, was absent.Finally, in Making Tuberculosis History: Community-based Solutions for Millions, we have achieved just that.The book offers a complete account of the program: how it was conceived, piloted, refined, scaled, managed, and ultimately adapted for new contexts, including Bangladesh’s rapidly growing cities and Afghanistan’s remote mountainous regions.Summarizing past successes and current dilemmas, the book’s ultimate aim is to advance efforts to eliminate poverty and disease globally.The public health challenges facing the world today demonstrate the critical need for large-scale thinking; lessons from BRAC’s TB program can inspire others to think creatively about health delivery and advancing towards health for all.

Making Tuberculosis History will be formally launched on October 27th at the 42nd Union World Conference on Lung Health. All conference participants are welcome to attend. BRAC plans to hold additional book launch activities in Dhaka, New York, Boston in the coming months. Those interested in purchasing the book can find information at the University Press Limited website.