A low-lying country whose image is often tarnished by poverty, political instability and natural disasters, Bangladesh deserves due recognition for the beauty of its landscape, its rich cultural heritage and the relentless zest for life that enables its heroic people to brave any of the obstacles that life in the world’s largest delta throws their way.

A low-lying country whose image is often tarnished by poverty, political instability and natural disasters, Bangladesh deserves due recognition for the beauty of its landscape, its rich cultural heritage and the relentless zest for life that enables its heroic people to brave any of the obstacles that life in the world’s largest delta throws their way.Given the vagaries of nature that it is subjected to on a routine basis, it should perhaps come as no surprise that Bangladesh was one of the first countries to deliver to the UN a strategy detailing its requirements for combating the devastating effects of climate change. Although figures from both the public and private sector continue to stress the fact that the country needs more foreign aid to cope with its catastrophes, they also highlight how our history with natural disasters has given us a head start in dealing with climate change and its consequences, putting us at the forefront of disaster-resilience.
To address the temperamental impacts of natural calamities, BRAC’s Disaster, Management and Climate Change (DECC) programme is implementing various measures to alleviate some of the dangers facing Bangladeshis most vulnerable to disasters. Building competence both at the institutional and community levels is thus a key feature of its agenda. Increase in adaptability and coping ability is being implemented by conducting predictive research, information transfer and education on environment, climate change and natural disasters –a major component of which has been disaster preparedness trainings at all stages.What has been witnessed as a result is a remarkable rise of people, especially women at the grassroots level, who have become ambassadors to the disaster mitigation cause in their communities. This year, the theme for the International Day for Disaster Reduction, which falls on October 13, is “Women and Girls- the (in)Visible Force of Resilience”. So, who better to celebrate on this day than the very women who are at the frontline of Bangladesh’s existential battle with climate change, making a difference and serving their communities in the face of disasters? Shahana Akhter, a shasthya kormi and Shukla Pal, a shasthya shebika, were two of the 78,476 health workers trained by the DMCC programme on first aid and natural disaster preparedness. Shahana, age 42, has been working with BRAC for the past 11 years and Shukla, a mother, grandmother and head of the household at age 55, has been with BRAC for the past 14 years. The honoured emissaries note the changes in their lives and reflect on personal growth as a result of the training they both received a year ago.

Typically, rural residents sought treatments for ailments and injuries like fractures, snake bites and drowning that frequently occur during floods from ojhas (witchdoctors). These often endangered the victims’ lives. One example they used was the commonly held notion of holding a drowned person’s feet and swinging them around to get water out of the lungs. Shukla remembered instances where she had seen children in her own village being treated similarly. The training helped them change their superstitions and now, they educate their fellow villagers and show them right from wrong. More importantly, they know how to create slings for fractured areas; stop the flow of poison to the rest of the body; give CPR and provide numerous other treatments for accidents and illnesses that are common during disasters.

Furthermore, serve as safeguards for their people during disasters by coming to their aid and carrying out standard operating procedures. Compared to the pre-training days, they now know the necessity of identifying shelters, sending the most vulnerable groups there first, alongside other preparations like disseminating information and storing valuables nearby among many more. Proud of the help they provide to those in need, they are truly respected by others in their community, valued as next to God for their support and contribution. 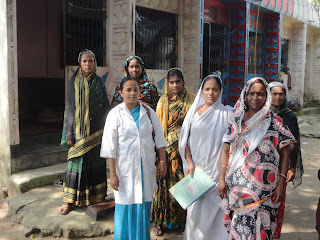 Nahida Akhter, a BRAC school teacher, who received the training about six months ago, recalls how as a child, she believed from myths that earthquakes were caused when angels carrying the world on their shoulders, shifted their weight from one side to the other. Today, she teaches her children facts that she learned from the training who, in turn, share it with their parents. 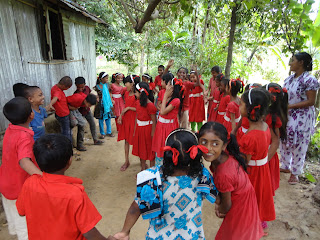 Fatima Akhter, a teacher at a BRAC school for tribal children who received the training more than a year back, was herself a graduate of the BRAC school programme. In retrospect, she says there was a big knowledge gap with regard to disasters among the teachers themselves. Now, trained individuals like her who represent 39,885 school teachers, are better able to comprehend not just the science behind natural disasters, but also the various precautions to take beforehand, actions advised during and the responses necessary after a disaster, all of which has significantly mitigated loss of lives and resources.

As opposed to before when they could not help someone even if they wanted to, they are now confident in assisting disaster victims more effectively. Related health and safety issues are discussed during parent-teacher meetings, as a result of which additional progresses have also been made. They have been able to promote the importance of cleaning latrines and protecting tube wells that often got contaminated in their flood prone community in Sylhet. Moreover, they managed to discourage children’s habit of ingesting and playing in the flood waters which used to make them sick. By enforcing such messages, they have greatly reduced the number of water-borne diseases in their area.

Other messages to minimize loss and ensure quick recovery included how to recognize danger signals and what to do before, during and after disasters like storing valuables nearby in plastic bags; taking shelter in designated areas; protecting livestock; identifying and assisting vulnerable people; executing evacuation plans; and sensitizing both monthly and seasonal hazards, among others. Identifying themselves as instruments of social change, the teachers have regularly shared fundamental messages with their students who have in turn shared it with their parents. Thus, they have also served the crucial role of information gatekeepers, leading to the speedy dissemination of disaster reduction knowledge for a larger number of people. They have noticed how as a result of factual messages trickling down through this paying-it-forward mechanism, the greater community has become more aware. 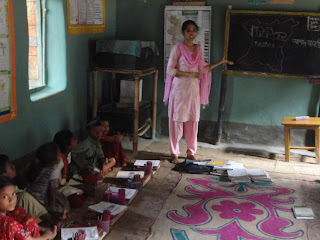 Shahana, Shukla, Nahida and Fatima portray the faces of many such women who demonstrate the resilience of Bangladeshis from all walks of life, by empowering themselves with knowledge and techniques that will serve as important tools for adaptability when disaster strikes. They may not wear capes, own hi-tech gadgets or know how to fly… but they truly are heroes who provide elemental support structure in the face of danger, forming the lifeline of DMCC’s accomplishments.