“Mobilizing and motivating is what BRAC Health Volunteers are good at doing.”

The BRAC Health Program in Pakistan is still very new – the program in the Northwest Frontier Province began last winter, and it already covers about 3,000 households under the management of 20 female Community Health Volunteers, 4 Health Workers, and one Regional Health Coordinator. This is the second health program to be launched by BRAC in Pakistan, (the first being in Punjab in the fall of 2009). 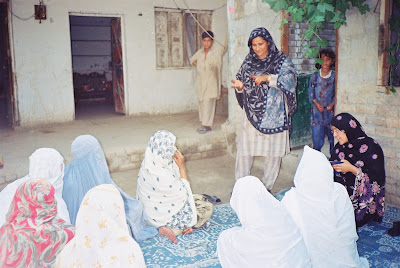 The BRAC Health Program in Pakistan is still very new – the program in the Northwest Frontier Province began last winter, and it already covers about 3,000 households under the management of 20 female Community Health Volunteers, 4 Health Workers, and one Regional Health Coordinator. This is the second health program to be launched by BRAC in Pakistan, (the first being in Punjab in the fall of 2009).

BRAC Pakistan’s microfinance programs first came to the Northwest Frontier Province in 2007. This paved the way for BRAC to start a health program there, starting with Nowshera. Volunteers and Health Workers were all recruited from communities where BRAC is already known to them through our pre-existing work in microfinance.

BRAC has conducted extensive door-to-door surveys in the target communities, and recruited Health Workers and Volunteers. Each Volunteer lives in proximity of the 100 – 150 households that she covers, and she visits them door-to-door and serves them inside their homes. Similar to what BRAC health volunteers successfully do in Bangladesh and other countries, Volunteers in Pakistan sell basic health products to the households under their coverage. Examples of such products include oral rehydration salts, sanitary napkins, condoms, cold and fever medicines, and other common medicines. This gives the Volunteers opportunities to earn income for their work, and effectively turns their homes into mini-dispensaries in an area where such dispensaries are sorely lacking.

The Volunteers and Health Workers were given extensive technical and field training to equip them to deliver quality services to the community. They are knowledgeable and equipped to address many common illnesses that can be treated effectively with common medicines. They are also educated on many basic health matters, such as sanitation, family planning, ante/post natal care, vaccinations, respiratory and stomach illnesses. They attend regular refresher courses to stay current on new health matters.

The Volunteers know each household they cover well, from their routine door-to-door visits to each home once to twice a month. As they have become the first point of contact for reporting any health problem in the households of the local community, they are also the first and primary source of new health information. For example, the government campaign against malaria was reinforced and made more effective in communities in Nowshera through the BRAC Volunteers that regularly serve them. BRAC adopted the messages in the government’s malaria campaigns and educated the members on these diseases through door-to-door visits to members, and at the community health forums that we organize.

Shazia Faroukh is a BRAC Health Worker in Nowshera. She learned about the opportunity with BRAC’s health program through her niece, who is a credit officer with BRAC’s microfinance program. For Shazia, each working day as a Health Worker starts at 7:30 in the morning. She recently spoke extensively on malaria and dysentery to the families she covers, both at their homes as well as at community forums.

With so many health messages being projected to the community – on malaria, dysentery, immunizations, and more – by health forums and household visits by the Health Volunteers and Health Workers, are people learning what is being taught? “After educating the people on these issues, when people act on what we teach them, that pleases me the most”, she says.

Shazia also has ideas of ways in which the health program can be scaled up. “People can’t afford to go to Peshawar to purchase health commodities. It is good that BRAC’s Health Volunteers are selling commodities, and BRAC sells better quality items. But they need a larger inventory with more variety of commodities to sell. It would be good if the government gave permission to sell mosquito nets.” (Note: all items sold by the BRAC Health Volunteers require permission from the local health authorities).

“Women hate to visit male doctors. There should be more weekly or monthly medical camps with female doctors.

“This is a very conservative area of the country. Women who work as BRAC Health Volunteers are very dedicated because they often have to overcome resistance from their own families for their work.”

We did find an exception where a husband strongly supports his wife’s work with the BRAC health program in Nowshera . Adnan Yousef’s wife Alia is a BRAC Health Volunteer. They heard about BRAC’s health program from the existing microfinance program there. “I like the fact that my wife works as a Health Volunteer. After we learned about disease prevention, we vaccinated our own children.” This is very encouraging to hear; in communities with conservative norms, an immunization campaign is often viewed as a government conspiracy with bad intentions.

“People often call my wife and say ‘I have a baby to deliver; please help me’,” Adnan continues. “BRAC’s Health Vounteers and Health Workers really command respect and trust of the people. I support my wife’s work in spite of family objections. There is a saying that when water drips without interruption on a rock, the rock gets smaller. I think the objections from the family will get smaller over time, too.”

In an area like the Northwest Frontier Province, where the society is very conservative, the need for women’s empowerment is even greater. BRAC is working to build trust, educate, and create awareness about the health program and the benefits and opportunities it has for them and their families. With a current base of 20 Health Volunteers in the Northwest Frontier Province, BRAC in Pakistan is looking to double the number of Volunteers to 40 in the coming months, thereby achieving a household coverage of 5,000-6,000.

Going forward, BRAC’s health program will see more joint initiatives with the local government health authorities. They are taking notice that BRAC’s Health Volunteers are effective at mobilizing communities and delivering health services to them.

BRAC in Pakistan is expanding its health program, especially in a high-risk area like the Northwest Frontier Province is a great motivating factor for the staff. “I am a man of this soil. I have the education and experience. I want to put these in service to my people,” says Qazi Faisal Zaheer, the Regional Health Coordinator for BRAC’s health program in Nowshera of the Northwest Frontier Province. He came to BRAC after a career in marketing with a pharmaceuticals company. “Mobilizing and motivating is what BRAC Health Volunteers are good at doing. When you educate a woman (i.e. the mother of a household), you educate an entire family.”