If a cyclone hit, how should we react? Who will evacuate to cyclone shelters first? What will happen to livestock? BRAC’s cyclone simulation helps answer these questions well in advance to prepare for when disaster strikes.

Raihan ran across the open field of his village that he knew since childhood. But he couldn’t move as he wished. Splashes of water hit him hard, pushing him back. He could barely see ahead apart from silhouettes of people grabbing onto each other in the distance. He held on to a branch and secured himself to a tree. The water made it hard to breathe. He patiently clung on, as instructed by his drama teacher. 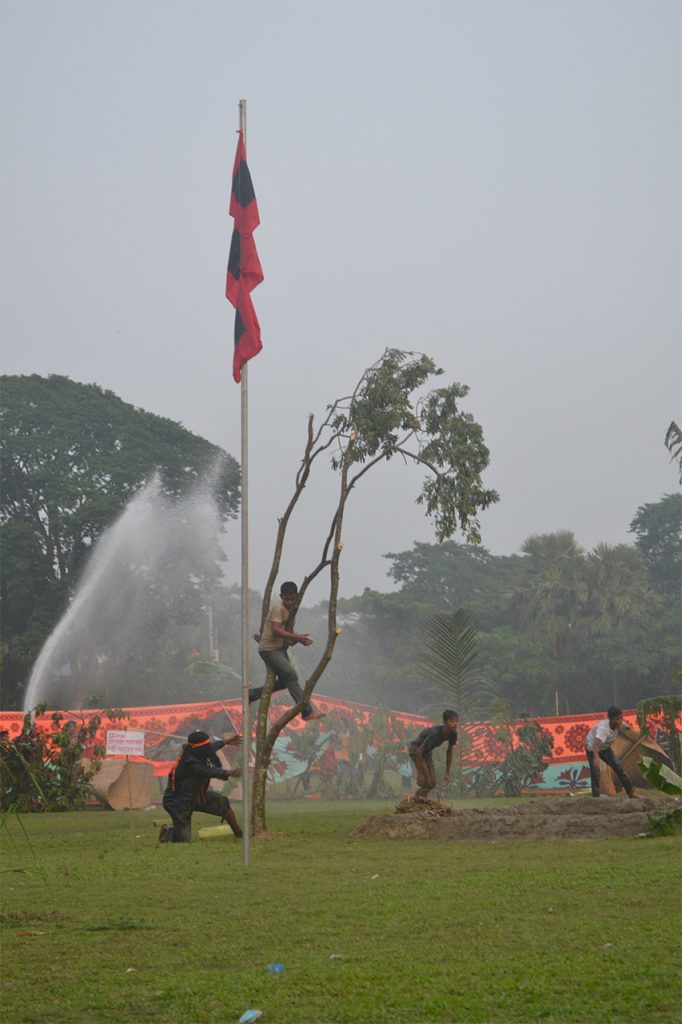 At this point the gentleman from the fire brigade stopped hosing water, and all of a sudden, a sunny afternoon was restored. Raihan heard a roaring round of applause and cheer from the crowd encircling his performing ground. He smiled with pride to have participated in the cyclone simulation drama.

BRAC’s cyclone simulation is a demonstrative exercise where a community acts out what they would do in their village in the event of an approaching tropical cyclone. It depicts their peaceful village at an ordinary day, which then is torn apart with simulated winds and storm surge.

How would they react during this emergency period? Who should move to the cyclone shelter first when siren goes off? What happens to the fishing and agricultural livelihoods? Involving community in awareness building activities is an effective method of disseminating lifesaving messages.

When the actors are community members themselves, each spectator watching the drama effectively relates to the roles played and absorbs the consequences of each family’s decision during the disaster.

Cyclone simulations have existed for decades across 14 coastal districts of Bangladesh. Community members are now able to describe actions to be taken during a crisis – being prepared with dry food, securing valuables, taking vulnerable members to shelters early and lastly, leaving everything behind to be present at the shelter.

However, continuous refreshers are needed to remind people of the dangerous consequences of inadequate preparations.

Children like Raihan have not seen cyclones such as Sidr in 2007 or Aila in 2009, and the younger generation needs practical understanding of potential devastation that cyclones can cause. This is where BRAC’s humanitarian programme stepped up to re engage the community in a cyclone simulation field demonstration. During the latest cyclone season in 2019, BRAC partnered with the government’s cyclone preparedness programme to bring communities across five of the most vulnerable locations. Shyamnagar of Satkhira district, Shoronkhola of Bagerhat district, Pathorghata of Borguna district, Kolapara of Potuakhali district and Chattogram Sadar have all been affected by cyclones multiple times or are marked to be at risks of climate change. Drama scripts were customised to incorporate roles of BRAC staff during an emergency; their contribution to assisting community evacuation before a cyclone, activation of district and sub-district level emergency response teams, loss and damage reporting and relief distribution to those affected.

This customised series of simulations imposed particular challenges. Establishing BRAC’s role in the community as a responder during an emergency was not easy, since BRAC is better known for its development or rehabilitative work. Persistence, however, brought out the best of government-development sector collaboration. Spectators seemed to have started to accept this additional aspect of BRAC that they already are familiar with and can trust. Effectiveness of this was proven during BRAC’s organised preparedness and  response showcased by decentralised emergency staff during cyclone Bulbul this year.

Cyclones are inevitable. We cannot escape the consequences of this hazard given our coastal exposure to the conical shaped Bay of Bengal.

Imprinting key messages in the minds of vulnerable groups regarding safety, measures of taking shelter and household level preparedness is recognised as the first and most effective forms of community-based disaster risk reduction. Knowing that we cannot stop this recurring hazard, BRAC’s humanitarian programme dedicates in building resilience of communities so that they can learn to cope with the adversities of cyclones.