BRAC Uganda microfinance borrower, Lydia Nojaki Birungi, 43, won the bronze prize in the 2011 Citi Micro Entrepreneurship Awards. Lydia, a BRAC small enterprise borrower since 2009, was recognised by Citibank and The Association of Microfinance Institutions of Uganda (AMFIU) for her entrepreneurial ability. Lydia runs an agrochemicals business in Kasese and also farms a 15-acre plot of land that provides food for a large section of her community. Lydia received a certificate and a prize of 1.5 million UGX ($600) from Citibank. She plans to invest her winnings in her business. 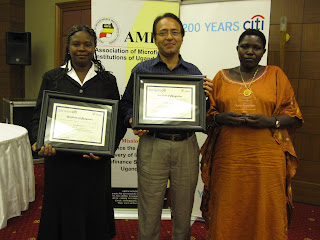