“The garment industry is the largest export earning sector in Bangladesh, and our workers are the backbone that we depend on. We must take care of their health if we want to take care of the health of our country,” stated Mr. Masud Quader Mona, Chairman of Standing Committee on TB for Bangladesh Garment Manufacturers Export Association (BGMEA).

“The garment industry is the largest export earning sector in Bangladesh, and our workers are the backbone that we depend on. We must take care of their health if we want to take care of the health of our country,” stated Mr. Masud Quader Mona, Chairman of Standing Committee on TB for Bangladesh Garment Manufacturers Export Association (BGMEA). 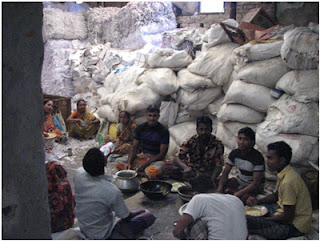 For many Bangladeshis, Dhaka represents economic opportunities, particularly in the midst of climate change that threatens traditional agriculture. While growing industry offers a chance for many to escape poverty, long hours in densely populated and poorly ventilated working areas put them at risk for tuberculosis. [Photo courtesy: Ruthie Birger]

It surprised me that the Director of one of the country’s largest garment factories had agreed to meet with me to discuss TB control in Bangladesh, and as he explained the program, I learned that he was no casual observer, but a powerful advocate. BGMEA has almost 2,000 companies as members, employing 1.2 million garment workers. They are primarily young women, who live and work in close quarters, and they are at high risk for airborne infections like tuberculosis. Without support from their managers, they are unlikely to access care and face significant challenges adhering to the 6-months of daily medications required to cure the disease. BGMEA, with support from the Global Fund, has established TB microscopy facilities in its health clinics and trains factories’ onsite nurses to provide treatment. The services at the BGMEA health clinics are free and a worker can request a pass to the facility from their manager at any time. The TB program also runs orientation trainings for workers and managers to raise awareness about TB and the importance of early detection and treatment completion. The program is still nascent; none of the 110 patients have yet to complete their 6-months of treatment. Already though, it has faced significant challenges in creating a treatment program that can endure the instability of the worker’s lives—the movement, the changes in employment, the issues of privacy. Constant contact, both face to face and via phone, occurs almost daily, so that the field officers can establish a relationship with the patients and ensure their adherence. “We have learned to be very, very flexible,” said Dr. Shoffiullah Talukder, TB Program Director for BGMEA. Flexibility from the program enables these patients to adhere to the treatment regimen, a critical achievement when the consequences of failure include drug resistant TB that can also spread and is much more costly and complex to treat.

BGMEA’s program illustrates the complexity of the urban environment and the urgent need for innovative programs. Dhaka is one of the world’s fastest growing cities, expected to grow at almost 3% annually for the next 10 years. Forty percent of its 9.3 million inhabitants live in slums, which have a staggering population density of 220,000 per km2, in addition to the pervasive issues of poverty and transience, which fuel TB transmission.

Already responsible for about 80 million people in rural areas, BRAC established its first TB program in Dhaka in 2004. BRAC’s major accomplishment in TB control was scale; it had replicated its model relying on the shasthya shebika (health volunteers) with high levels of case detection and treatment success. In Dhaka, however, the model was inadequate. Too many patients sought care from other providers, particularly the ubiquitous drug sellers or general practitioners, when they could afford the fees. Garment workers left their homes early in the morning and were not home to receive the shebika during her typical household visits. 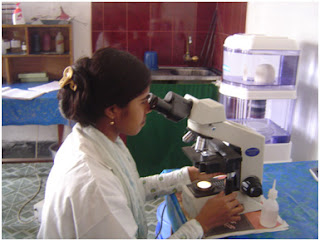 Ms. Mahmoda Begum is a laboratory technician at BRAC’s Dakhin Khan office. Many of the suspected cases are referred by local private practitioners.

BRAC had not confronted such a crowded health delivery space in the rural areas. Here, the problem was less access to care, but quality of care. There were no regulations for private providers; a survey on their practice showed many were unaware of the national TB program (which included the diagnosis and 6-months of medication for no cost to patients) and many were unfamiliar with the concept of directly observed therapy (DOTS), which has been recommended worldwide as a strategy to support patients in taking every dose of medication. As the private sector is the most popular first point of care among Dhaka’s residents, educating and engaging them was critical.

In Dakhin Khan, a neighborhood in northern Dhaka, I met a pharmacist who had been through BRAC’s orientation program several times. He refers patients with a persistent cough to BRAC’s office for testing and also offers to oversee their treatment (i.e. provide DOTS) if they prefer him to a shebika. After diagnosis, if a patient requests him as his/her treatment support person, BRAC brings the medications to the pharmacy at no cost. He spoke enthusiastically about BRAC’s training, though challenged them to engage pharmacists more intensely and more publicly recognize their contributions. 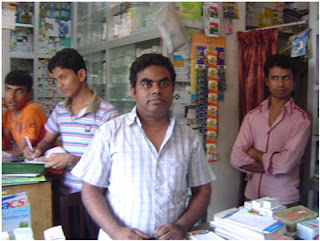 Mr. AslamUddin Ahmed is a pharmacist in Dakhin Khan, Dhaka. With BRAC’s support, he has overseen two patients in successfully completely their TB treatment.

Why involve shebikas at all? I wondered, as I headed to another area called Badda to observe the shebikas receiving their monthly training. When I arrived, they were in the midst of discussing how hard it was to track patients down sometimes; they often failed to come to the shebikas’ houses to take their treatment. Many of their patients are garment workers who prefer not to share their status with their employers or co-workers, instead passing by the shebika’s house early in the morning or during their lunch break for their medications. From the anecdotes that the shebikas share, it is clear that many of these patients can’t manage the treatment on their own. They need someone willing to call them, track them down, who knows where they live and take the time to ensure their adherence. Pharmacists can’t do this, and BMGEA provides flexible support to its workers, and only those who choose to go through institutional channels for health services. Shebikas provide yet another layer of TB control, for others living in the slums with TB, garment factory workers who have privacy concerns, and those without the physical or mental means to seek out treatment on their own.

Urban TB requires a partnership approach—a recognition that in a city with a diverse population, there will be no perfect model; instead a mix of programs meets patients wherever they are. That need, which was part of the initial motivation for shebikas in the rural areas in the 1970s, when BRAC was first dabbling in health delivery, remains just as present, though the specific characteristics of that need have changed. And the importance of listening to the patient’s voice has never ceased. I recall a patient’s comment on BRAC’s program from a recent qualitative study on BRAC’s urban TB program. The patient said, “Here [at the BRAC center] the people take care of us properly and regularly—I could not take such care of myself because sometimes I would forget and fail to take my medicine. The BRAC center helps a lot.”

By Maria A. May
Research Fellow, BRAC Health Program

BRAC is publishing a book on its TB program! Keep your eyes peeled for more information about its release this fall.